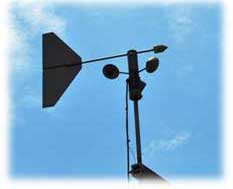 This project is hosted by the KERALA FOREST RESEARCH INSTITUTE, Peechi, Kerala, India and sponsored by the Kerala State Council for Science, Technology and Environment (Government of Kerala). As a part of initiating several ecological studies, four automated weather stations were installed in 1997 in the Peechi-Vazhani Wildlife Sanctuary, Chinnar wildlife Sanctuary, Silent Valley National Park and Eravikulam National Park. All the stations started operating in 1997 and the hourly weather parameters were collected from all the stations. These parameters include atmospheric temperature, relative humidity, total solar radiation, wind velocity, wind direction, rainfall and soil temperature at two depths (15 cm and 30 cm). The hourly data have been processed using a computer programme developed in KFRI. Using this, the hourly data have been condensed into daily averages, maximum and minimum and presented in this report. This has been furthercondensed to monthly averages, maximum and minimum. The wind velocity and direction have been given as Windrose diagrams. A further analysis of the data has been done using elevation of the four locations as a function. This showed a typical variation inan elevational gradient in the Western Ghats, taking into account the special features of a rain shadow location, namely, Chinnar Wildlife Sanctuary. It is possible to do a number of further analyses using this data. Arrangements are also made to supply the hourly data on computer disks because of the extensive nature of the data . Read the research report "Weather data acquisition from selected Wildlife Sanctuaries in Kerala." for more information.

Currently Tree Physiology Department is operating a research project titled Population dynamics of selected endemic and threatened trees in the Protected Areas of Kerala: Temporal analysis in the context of climate change funded by Department of Biotechnology, New Delhi. As part of this project, two automatic weather stations were purchased and are under installation at study sites viz. Peechi - Vazhani and Shenduruney WLS of Kerala. It is aimed at collecting data regarding atmospheric temperature, relative humidity, total solar radiation, wind velocity, wind direction, rainfall and soil temperature, correlating temporal phenological changes met on target species in the context of climate change.