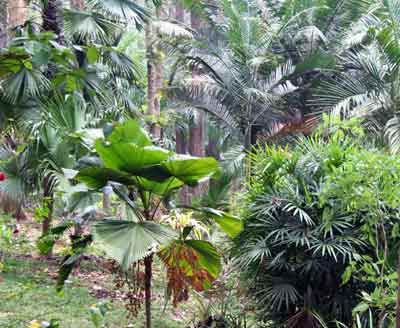 Palmetum is a live collection of indigenous and exotic palms, which serves as a facility for educating the public about the need for conservation of palms. Palms are woody monocotyledons coming under the family Arecaceae (Palmae). They form a vital component of the forest ecosystem. With their graceful architecture, palms often dominate the landscape of tropical habitats, providing many of the essentials for human life. Palms have been managed by the local inhabitants for food, fodder, handicrafts, thatch and construction material. Because of their aesthetic value, palms are cultivated for both indoor and outdoor decoration.

There are about 2600 species of palms under 200 genera in the world. In India 105 species under 22 genera occur in the three major geographical regions viz., Peninsular India, North eastern India and Andaman and Nicobar Islands. Although conservation and sustainable utilization of this resource assumes great importance, conservation attempts have not received significant world-wide attention.