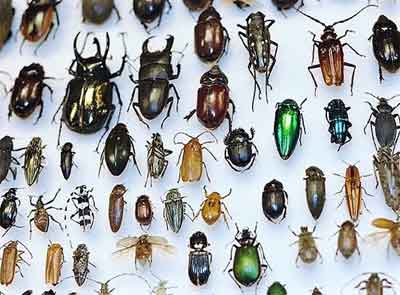 The KFRI Insect collection has 40,483 tropical forest insect specimens collected over a period of four decades. The collection serves as a reference collection used by entomologists for identifying insect specimens. Of the insects in the collection, 17484 specimens have been identified and the rest- 22999- remains to be identified. Major groups in the collection represented are Lepidoptera, Coleoptera, Hymenoptera, Diptera, Odonata, Orthoptera and Hymenoptera. The insect collection provides identification aids for students and researchers from various colleges / institutions. In order to solve the taxonomic complexities of insect specimens in KFRI collection scientific specimen loan procedures have been initiated for experts from scientific institutions across the country. Recently five new species of beetles were newly reported to science from KFRI Insect Collection.

Status of specimens in the KFRI Insect repository