Teak, scientifically called Tectona grandis L.f. (Family: Lamiaceae) is considered as a grand jewel in the diadem of tree species that occur naturally in the tropical forests of the world. Teak also became an important plantation species and many of the milestone developments in the history of teak plantations took place in Kerala, India. Nilambur, located in Malappuram District of Kerala State is the place where India's first Teak plantation was raised during the 1840s, paving the way to ensure the steady supply of teak timber in the face of dwindling resources in the natural forests.

Recognising the historical importance of Nilambur leading to a momentous shift from a purely extraction and regulatory function of forestry to a phase of resource development, Kerala Forest Department (KFD) and Kerala Forest Research Institute (KFRI) have decided to establish a thematic Museum, devoted entirely to the unique species - Teak, which produces the world's most ideal timber that can be put to almost any conceivable use from handicrafts to building ships.

The Teak Museum located within campus of Kerala Forest Research Institute Sub Centre at Nilambur was opened to the public on 21st May 1995. The Museum is ideally located in Nilambur where the plantation activities on this species were initiated about 160 years ago. Also, the Museum is situated very close to the oldest existing teak stands - the famous 'Conolly's Plot'. The Museum is the first of its kind in the world and aims at disseminating information on various aspects of teak, including history, cultivation, management, utilization, socio-economics, etc.

In the Museum, through exhibits and associated texts, information is provided on historic, aesthetic, scientific and cultural values of the species. Exhibits of historic and artistic values are displayed on the ground floor, while the first floor is mostly devoted for exhibits and information of scientific nature. The extensive root system of a 55- year- old teak exhibited in the portico is symbolic sign welcoming the visitors to witness the past, the present and the future at the museum. In the ground floor of the double-storied museum, a translite of `Kannimara teak', the oldest naturally growing teak tree located at the Parambikulam wildlife sanctuary and the life-size replica of the trunk of the largest known teak tree growing in Malayattoor forest division are exhibited. A translite of a giant tree present in the oldest teak plantation in the Conolly's Plot at Nilambur helps visitors to visualise the teak plantation activities initiated 160 years ago. The traditional granary and a miniature model of sailing vessel - Uru - made up of teak wood are the other attractions. Teak poles of different sizes and qualities obtained during ` thinning' of teak plantations are exhibited along with details of standard classification of teak poles. The foliage, flowers, fruits and bark of tree are depicted in one bay. Juxtaposed is a large stump of 480-year-old teak tree brought from Nagarampara Forest Range in Kottayam Forest Division. 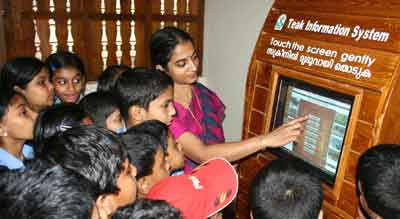 The first floor of the Museum is devoted to display of scientific information and related exhibits on various aspects of teak. It starts with detailed information on flower, seed and natural regeneration. The characteristics of plus trees (morphologically superior tree as compared to nearby trees) are also described. Seed grading and pre-sowing treatment for better germination of the seed are also depicted. Two methods adopted for vegetative propagation in teak viz., tissue culture and clonal propagation are presented with the help of translites. The adjoining bay shows stages in the complete rotation cycle of teak from seed to a mature tree. Also present are a collection of over 300 butterflies, moths and insects found in teak plantations. It has another exclusively section on various problem encountered such as insect pests, plantation and nursery diseases and physical disorders of teak.

Series of paintings on tree felling operations, collection of photographs depicting the phenological events of teak at different seasons, exhibits on traditional harvesting tools, wood samples of different ages from different parts of the world are also special attractions in the museum. Portraits of great men behind the successful establishment of teak plantations as well as those who have sown the seeds of plantation forestry in India like H. V. Conolly, Chathu Menon and T.F. Bourdillion, take the visitors to a magnificent era 150 years back. The museum also has a world class library on teak and a mini auditorium for audio visual presentations. A Teak Information System (Touch Screen facility) in the Museum also helps the visitors to get information on various aspects of teak tree such as its habit and distribution, history, morphology, cultivation, harvesting, timber, utilization etc.