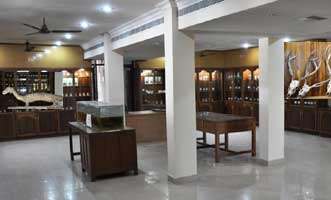 The Wildlife Museum is one of the popular destination in KFRI with over 3000 visitors annually, including trainees from the forest department, public and students from various universities and colleges across India. The Wildlife Museum was established in the Department of Wildlife Biology for displaying the rare specimens of wildlife, which were collected as part of different research programmes of the department. The specimens are mostly stored as wet collections with over 800 specimens collected from various forest areas and reservoirs in the State of Kerala. This include about 135 species of fish, 35 amphibians, 76 reptiles including 41 snakes, 16 species of mammals and several stuffed specimens, collections of wildlife footprints and several invertebrates. These collections form a valuable resource for researchers. 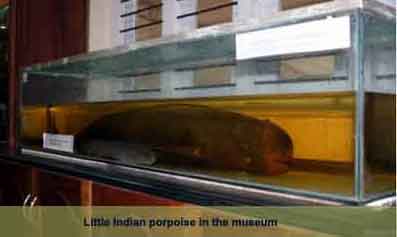 Other collections and displays

The pugmark collections of the museum include that of tiger, tigress, Wild Boar, Wild Dog, and Spotted Deer. The museum also have collection of different stages of the horns of sambar deer. Species involved in illegal wildlife trade such as Star tortoise, Sand boa, Painted bat and Barn owl are also displayed in the museum. The museum also has collections of several display posters on the endemic or threatened animals of Kerala and summaries of the research projects carried out by the Department of Wildlife Biology.